Aura Utrecht is commissioned by Public Works, an initiative of the Foundation Kunst in het Stationsgebied, in collaboration with the city of Utrecht.

Colorful and playful curtains form an oasis and an energy field in the traffic buzz of the city. The transparent shutters shelter and frame a moment in space and time with an aura of light. Situated on top of the ‘Jaarsbeurstrappen’ at Utrecht Central Station in The Netherlands, welcoming those who pass by, is Aura, a tripod sculpture supporting cylindrical stages defined by colorful, see-through curtains. Each of the three spaces proposes a site where a grand theatrical spot highlights an urban stage and terrace. From the inside looking out, the world becomes tainted in an array of complementing colors. Looking from the outside in, the stages appear lit by a magical limelight, signaling the transition between the central train station and the West side of the city. Here everyone is invited to become an actor and spectator of the public space, or to just take a pause and enjoy the play of movement and light while eating a sandwich or enjoying the view. 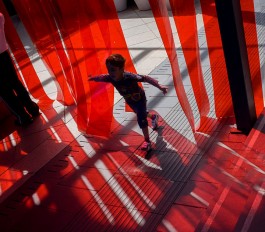 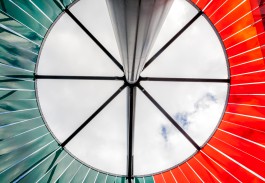 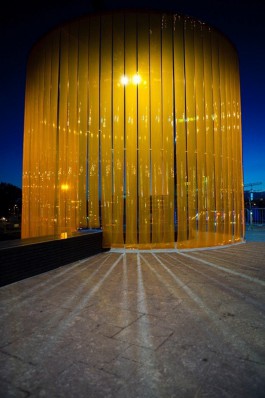