Peel Plaza is a sculpture and, at the same time, a publicly accessible urban terrace, consisting of a wooden decking whose parts appear to have been peeled off. Part of the decking, which also incorporates the existing trees, are six benches and tables. The peeled-off parts - the so-called Peels - on which one can sit or lie down, form lively and spatial gestures on Weesperplein, evoking the idea of an oasis in the city. As a whole, Peel Plaza forms a work of art that invites physical interaction. By fusing functionality, sculptural forms, trees and greenery, a unique and inviting place is formed, which extends along Weesperplein. A public square, activated by its users, who come to rest or spend a moment together. 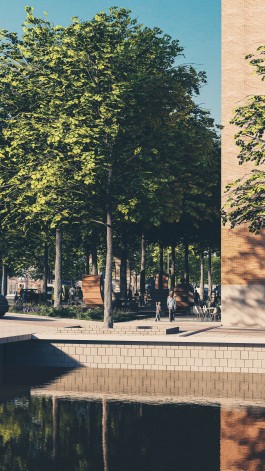